ORGANIZERS AND IDEOLOGISTS OF THE COVID-19 FAKE PANDEMIC
MUST BE IMMEDIATELY ARRESTED AND CHARGED
WITH CRIMES AGAINST HUMANITY!
#МеждународныйУголовныйКовидТрибунал
#InternationalCovidCriminalTribunal

Jacob Jugashvili /Яков Джугашвили /იაკობ ჯუღაშვილი/ is a Russian-Georgian artist. The surname may also be spelled Djugashvili or Dzhugashvili in English.Born July 14th 1972 in Tbilisi, Georgia, USSR. He is the Great-grandson of the most influential political leader of the 20th century Joseph Jugashvili, better known as Joseph Stalin.
Jacob completed his secondary education in Moscow and thereafter studied at Tbilisi State Academy of Fine Arts from 1992-1994. In 1997 he graduated from the Glasgow School of Art (Painting and Drawing) with a BA.
Between 1997 and 2000 Jacob showed at various London venues: the Boundary Gallery, Lamont Gallery, Royal College of Art, London Art Fair, Georgia 2000 exhibition at Cork streets Gallery 27. In 1999 his works were shown at Batumi Art Museum (Batumi, Georgia).
Jacob’s works are available on  SaatchiArt Artfinder Artpal FineArtAmerica Ярмарка Мастеров
In 2000-2005 Jacob did almost no painting, working instead in IT business. On October 2005 he joined his father, a military historian and retired colonel of the Soviet Army, Yevgeni Jugashvili (1936-2016) to a conference in the Netherlands (‘Yalta and Beyond’ organized by the Maastricht University and Assamblee BV) to mark 60th Anniversary of the Yalta Summit in 1945. This event was also attended by the grandsons of the two other Allied leaders Winston Churchill and Franklin D.Roosevelt.
Jacob is currently involved with politics and public movements in Russian Federation.
He is a IGPR ZOV movement activist. In 2015 four IGPR ZOV members were arrested “for attempting to initiate a referendum” and jailed for 4 years by Russian authorities . One of them is a well-known Soviet and Russian engineer, writer, researcher and publisher Yuri Mukhin.
Jacob is a co-founder of the non-profit, public research foundation “Immortality Of Life”. The foundation aims to experimentally prove the immortality of the human personality we call “soul”.
Since March 2020 Jacob is opposing a global COVID-19 tyranny. On December 24, 2020 he was banned by Youtube for publishing videos debunking COVID-19 scam. These videos are now available on RUMBLE, TELEGRAM, VIDIOBLOG, BITCHUTE.
Jacob’s mother, Nana Nozadze, is a retired German philologist.
His older brother Vissarion (Bessarion) is a film-maker whose short film The Stone won the prize at the Oberhausen International Short Film Festival in 1998. Vissarion has two sons - Joseph and Vassili.
Jacob lives in Moscow with his wife Nino Lomkatsi and their daughter Olga. 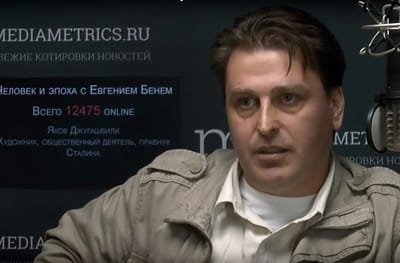